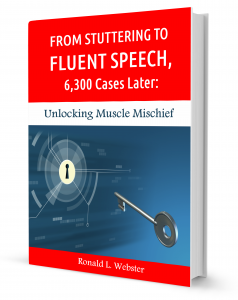 Stuttering is one of the most misunderstood and mistreated of human disorders. In his book, From Stuttering to Fluent Speech, 6,300 Cases Later: Unlocking Muscle Mischief, stuttering expert and psychologist Ronald L. Webster, Ph.D. dispels the myths that surround the disorder and takes readers on a compelling journey into stuttering from a scientific perspective.

Dr. Webster explains the origin of stuttering, possible causes, and how his nonprofit center, Hollins Communications Research Institute (HCRI – www.stuttering.org) uses cutting-edge science to successfully treat stuttering. The following is the first in a series of chapter excerpts from his in-depth book.

A Unique Problem in a Most Special Species

Stuttering is a most special problem. It rides within the flow of language—specifically, spoken language. My work has involved examining stuttering as a set of phenomena in nature. I have searched for patterns of lawfulness within this problem. I believe that the discovery of unique patterns among physical events in stuttered speech can set the stage for both developing a way to explain stuttering and to construct an effective treatment program for it.

Stuttering is special in a cosmological sense. Look up into the clear, dark night sky. The naked eye allows us to see about a thousand stars. Occasionally, we are able to see planets or watch man-made satellites cross above us. We can also make out a faint band of stars, the Milky Way, streaming across the sky.

There is much more out there in the night sky beyond the scope of the human eye. Trillions of stars and billions of galaxies are spread throughout the universe. The numbers are so large and the distances so vast that they are difficult to comprehend. It is amazing to grasp the idea that the distance light can travel in a year is a standard unit of measurement in the study of the universe.

Stop for a moment and consider the billions upon billions of galaxies that make up the universe. At the present time, we know of only one where stutterers are found. That is the Milky Way galaxy, characterized as a spiral nebula over one hundred light years across, about ten light years thick, and consisting of hundreds of billions of stars. Our solar system—comprised of the sun, eight planets, and a variety of moons, asteroids, and comets—lies in the Orion-Cygnus arm of the Milky Way galaxy, about twenty-seven thousand light years from its center.

In our solar system, there is only one location where stuttering is found: that is on planet Earth, the third planet from the sun. Even though the search for extraterrestrial intelligence (the SETI project) continues, to date, there are no signs of life beyond Earth. Clearly, this planet is an unusually distinctive place.

Stuttering is special, not only in terms of galactic distribution but also when viewed against the broad range of animal species represented on our planet. It has been estimated that there are more than two million animal species on planet Earth. However, there are a relatively small number (about five thousand) of mammalian species.

It is particularly meaningful that only a single mammalian species uses the distinctive and powerful form of communication identified as language. Of course, that species is the modern human, Homo sapiens sapiens. The important point is that while many different animals demonstrate communication, the evidence indicates that the powerful tool of syntactic language is unique to humans and is a necessary condition for the presence of stuttering.

In my view, speech represents the most complex naturally occurring individual behavior humans produce. The complexity of speech production can represent a barrier to trying to understand stuttering. However, if we take time to learn and understand some of its basic properties, we can begin to make sense out of the miracle of our speech—and we can improve our understanding of stuttering.