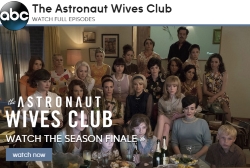 The finale of the ABC series Astronaut Wives Club gave viewers a dramatic summary of the evolving personal and professional journeys experienced by the seven wives of the Mercury astronauts. The setting took place during a crucial era in U.S. history where the Cold War, gender attitudes and the country’s “space race” were intersecting. The show was based on the book by the same name, written by Lily Kopp

One of the wives showcased in the series was that of Annie Glenn, the impressive wife of astronaut and Senator John Glenn. Annie had a severe stutter and then came to Hollins Communications Research Institute (HCRI) for advanced stuttering therapy. She calls her experience at HCRI a life changer. As a result, Annie has been a long-time advocate of HCRI stuttering therapy and serves as a role model for people who stutter across the country.

Actress Azure Parsons played Annie. As each episode unfolded, Azure effectively depicted the multitude of communication challenges Annie faced because of her stuttering. In the season finale, Annie was interviewed and asked about the transformation of her speech. With eloquent, fluent speech, she attributed her ability to speak without stuttering to participating in the intensive stuttering therapy program at HCRI. As she has said many times in real life, on the show Annie’s character described her treatment as “life changing.”

At the end of the episode, Annie is shown speaking at a speech and hearing conference. She shared her personal experience going from stuttering to fluent speech – and advocated on behalf of people who stutter.  To watch the final episode, click here.

At HCRI, we are privileged to have helped Annie on her path to fluency. She and John are cherished friends and supporters of the Institute. We deeply appreciate all they have done to advance stuttering treatment and our mission to help people around the world achieve fluent speech.